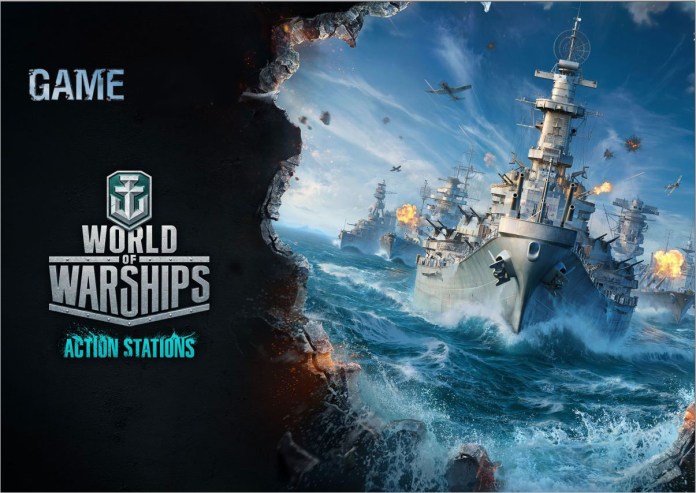 World of Warships, one of the famous Warships Battle Game is a free-to-play naval warfare-themed massively multiplayer online game produced and published by War-gaming, following the earlier games world of tanks and world of warplanes it intense naval combat of the first half of the 20th century.

Players can battle others at random or play cooperative battle types against boats or an advanced player versus environment battle mode. For the most skilled players, two seasonal competitive modes are available.

With the game, you enjoy limitless gameplay possibilities with four classes of iconic war vessels, an array of upgrades, improvements, and a range of strategically designed maps inspired by real-world locations in the Atlantic, Pacific, and Arctic oceans.

In World of Warships, you are spoiled for choice with all the ship models available, with the attention and respect paid to the identity and history of each of the combat vessels.

Choose between the speed and stealth of destroyers, endurance and firepower of battleships, maneuverability and tactical agility of cruisers or air supremacy, and multi-tasking challenge of aircraft carriers.

You can build and enhance your naval fleet and employ a wide arsenal of devastating weaponry to gain control of the battlefield and send your enemies to the bottom of the sea.

With both strategy and action at your command, World of Warships is pushing the limits of military arena gameplay in breathtaking ways.

Prepare for a new combat experience where saltwater, fire, and steel meet together as you engage in fierce naval warfare like never before! Take the helm, Commander, crush the enemy and dominate the oceans.

Torpedo armament is their key advantage that guarantees a highly effective attack power.

Destroyers deploy smoke screens to conceal their maneuvers or hide the location of allies.

The most versatile warship type in the game.

Ideal for hunting destroyers and protecting allies from airstrikes.

Capable of acting independently, however, a pack of cruisers is a real force to be reckoned with.

Heavy armor allows battleships to withstand numerous attacks and dominate on the battlefield.

Capable of sinking virtually any ship with a single main battery salvo.

Perfect for carrying out devastating squadron attacks from a distance.

Carrier-borne aircraft excel at detecting the enemy and revealing their disposition.

For successful actions in battle, you also receive a small amount of Free Experience (Free XP) that can be used to research any ship or module in the game. Experience earned on Elite and Premium ships can be converted to Free XP.

Credits are earned for participating in a battle and destroying or damaging enemy warships. Credits can be spent on ship maintenance, upgrades, new modules, and warships to further advance in the game. The amount of credits earned in each battle depends on the outcome and your contribution.

There are some other features listed, and for more information on the game, you can read the World of Warships Guide here.

Did you ever play World of Warships or any other Warships Battle Game? Tell us your experience in the comment section.

Disclosure: We always believe, to be honest, and transparent with our audience. In our opinion, this is the only way to build a community. If you click on some links in this article and offer to make a purchase we may earn some commission from our Affiliate partners including World of Warships. Learn more about our Privacy policy.

Nextiva: The Best VoIP System Provider In The Industry